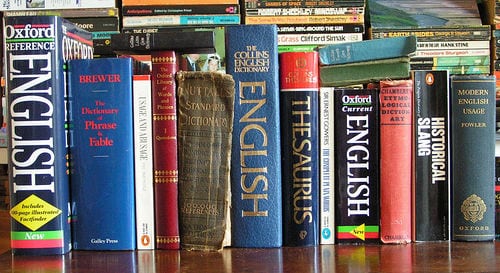 One of the major problems that faces the lexicographer at the start of a new dictionary is, quite simply, the selection of entries for definition. Of the total English word stock of some million words, the modern American “desk” or “college” dictionary includes approximately 100,000 to 150,000. Although many rare, obsolete, and archaic words are cited, the selection of entries begins with the commonest words of the language. In contrast, it is of interest to note that the earliest British dictionaries, published in the 17th and early 18th centuries, were primarily glossaries of hard words. How did this change in policy come about?

Robert Cawdrey’s Table Alphabeticall (1604), generally considered to have been the first English dictionary, claimed to teach “the true writing, and understanding of hard usuall English words, borrowed from the Hebrew, Greeke, Latine, or French, etc… with the interpretation thereof by plain English words.” This unassuming little book, containing scarcely 3000 entries, was patterned on the bilingual and multilingual dictionaries that had been appearing in Europe for more than a hundred years before Cawdrey’s time. What distinguished the Table Alphabeticall from its interlingual predecessors was that it “translated” from English to English–that is, from hard English to plain English. Nineteen years after the publication of Cawdrey’s book, an enterprising fellow named Henry Cockeram published his English Dictionarie, a three-volume work of which the second volume converted “vulgar words” into “more refined and elegant speech,” thereby completing the pattern set by the earlier dictionaries that had translated from Latin to English and from English to Latin.

Other prominent dictionaries of this period that followed the tradition of defining only the hard words were John Bullokar’s English Expositor (1616), Thomas Blount’s Glossographia (1656), Edward Phillips’ New World of English Words (1658), and John Kersey’s New World of Words (1706), a revision of Phillips, later abridged by Kersey and republished as the Dictionarium Anglo-Brittanicum (1708). Each of these books enlarged the scope of the English dictionary. Bullokar, with his inclusion of “olde words now growne out of use, and divers termes of art, proper to the learned in Logicke, Philosophy, Law, Physicke, Astronomie, etc.,” was the first to list obsolete words and to indicate the field in which a technical term had application. Phillips expanded the treatment of technical terms by availing himself of the services of a large number of specialists (“Antiquities, Elias Ashmole, Esq.; Law Terms, Mr. Hern; Magick, Mr. Turner; Physick, Dr. Sparks…). Kersey revised Phillips, enlarged the vocabulary by 20,000 additional entries, and added “a whole new scientific and technical vocabulary.”

In 1721 there appeared the first dictionary that attempted to treat the entire range of English vocabulary–the common as well as the difficult words. This was Nathan Bailey’s Universal Etymological Dictionary, whose stated purpose was to give “the Derivations of the Generality of Words in the English Tongue,” in addition to “a brief and clear explication of all difficult Words.” As Bailey’s interest in etymology applied to simple as well as learned words, he became the first English lexicographer to enter and define the common words of the language. The policy set by him in this matter is followed in most modern dictionaries, and the “dictionary of hard words” is no longer the usual kind.

The impossible inkhorn terms of Anglicized Latin (e.g., adolescenturate to play the fool; basiate to kiss; obequitate to ride about) continued to clutter English dictionaries until Samuel Johnson, declaring that these had not “been seen in any book but the works of lexicographers,” wisely chose to eliminate most of them from his masterwork, A Dictionary of the English Language (London, 1755). Building on the work of Bailey as Bailey had built on that of Phillips, Dr. Johnson brought to lexicography a more realistic approach to English vocabulary, and a new thoroughness and precision of definition. “The rigour of interpretative lexicography requires,” he states in his preface, “that the explanation and the word explained, should be always reciprocal.” In this, and in all major respects, lexicography truly came of age with Samuel Johnson. On his early work was built the Oxford English Dictionary, and through his influence on Noah Webster in this country he set the pattern for the modern American dictionary.