by VERBATIM Editor | Articles, Back Articles | 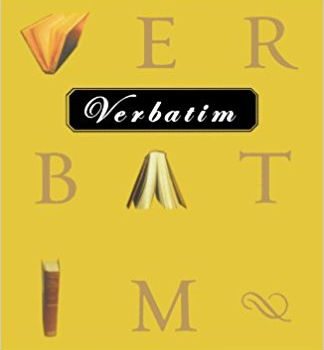 The World According to Student Bloopers

One of the fringe benefits of being an English or History teacher is receiving the occasional jewel of a student blooper in an essay. I have pasted together the
following “history” of the world from certifiably genuine student bloopers collected by teachers throughout the United States, from eighth grade through college level. Read carefully, and you will learn a lot.

The inhabitants of ancient Egypt were called mummies. They lived in the Sarah Dessert and traveled by Camelot. The climate of the Sarah is such that the inhabitants have to live elsewhere, so certain areas of the dessert are cultivated by irritation. The Egyptians built the Pyramids in the shape of a huge triangular cube. The Pramids are a range of mountains between France and Spain.

The Bible is full of interesting caricatures. In the first book of the Bible, Guinesses, Adam and Eve were created from an apple tree. One of their children, Cain, once asked, “Am I my brother’s son?” God asked Abraham to sacrifice Isaac on Mount Montezuma. Jacob, son of Isaac, stole his brother’s birth mark. Jacob was a patriarch who brought up his twelve sons to be patriarchs, but they did not take to it. One of Jacob’s sons, Joseph, gave refuse to the Israelites.

Pharaoh forced the Hebrew slaves to make bread without straw. Moses led them to the Red Sea, where they made unleavened bread, which is bread made without any ingredients. Afterwards, Moses went up on Mount Cyanide to get the ten commandments. David was a Hebrew king skilled at playing the liar. He fought with the Philatelists, a race of people who lived in Biblical times. Solomon, one of David’s sons, had 500 wives and 500 porcupines.

Without the Greeks we wouldn’t have history. The Greeks invented three kinds of columns–Corinthian, Doric, and Ironic. They also had myths. A myth is a female moth. One myth says that the mother of Achilles dipped him in the River Stynx until he became intolerable. Achilles appears in The Iliad, by Homer. Homer also wrote The Oddity, in which Penelope was the last hardship that Ulysses endured on his journey. Actually, Homer was not written by Homer but by another man of that name.

Socrates was a famous Greek teacher who went around giving people advice. They killed him. Socrates died from an overdose of wedlock.

The Renaissance was an age in which more individuals felt the value of their human being. Martin Luther was nailed to the church door at Wittenberg for selling papal indulgences. He died a horrible death, being excommunicated by a bull. It was the painter Donatello’s interest in the female nude that made him the father of the Renaissance. It was an age of great inventions and discoveries. Gutenberg invented the Bible. SirWalter Raleigh is a historical figure because he invented cigarettes. Another important invention was the circulation of blood. Sir Francis Drake circumcised the world with a 100-foot clipper.

Then came the Middle Ages. King Alfred conquered the Danes, King Arthur lived in the Age of Shivery, King Harold mustarded his troups before the Battle of Hastings, Joan of Arc was cannonized by Bernard Shaw, and victims of the Black Death grew boobs on their necks. Finally, Magna Carta provided that no free man should be hanged twice for the same offense.

During the RenaissanceAmerica began. Christo-pher Columbus was a great navigator who discovered America while cursing about the Atlantic. His ships were called the Nina, the Pinta, and the Santa Fe. Later, the Pilgrims crossed the Ocean, and this was known as Pilgrims Progress.

George Washington married Martha Curtis and in due time became the Father of Our Country.Then the Constitution of the United States was adopted to secure domestic hostility. Under the Constitution the people enjoyed the right to keep bare arms.

Abraham Lincoln became America’s greatest Prec-edent. Lincoln’s mother died in infancy, and he was born in a log cabin which he built with his own hands. When Lincoln was President, he wore only a tall silk hat. He said, “In onion there is strength.” Abraham Lincoln wrote the Gettysburg Address while traveling from Washington to Gettysburg on the back of an envelope. On the night of April 14, 1865, Lincoln went to the theater and got shot in his seat by one of the actors in a moving picture show. The believed assinator was John Wilkes Booth, a supposingly insane actor. This ruined Booth’s career.

The sun never set on the British Empire because the British Empire is in the East and the sun sets in the West. Queen Victoria was the longest queen. She sat on a thorn for 63 years. Her reclining years and finally the end of her life were exemplatory of a great personality. Her death was the final event which ended her reign.

The nineteenth century was a time of many great inventions and thoughts. The invention of the steam boat caused a network of rivers to spring up. Cyrus McCormick invented the McCormick raper, which did the work of a hundred men. Samuel Morse invented a code of telepathy. Louis Pasteur invented a cure for rabbis. Charles Darwin was a naturalist who wrote the Organ of Species. Madman Curie discovered radium. And Karl Marx became one of the Marx brothers.

The First World War, caused by the assignation of the Arch-Duck by a surf, ushered in a new error in the anals of human history.

“Anger is only one letter away from danger,” reminds my philosopher friend in the homily he mails to me each month.

Only one letter, but what havoc it can cause when omitted, added, misplaced, changed! Wars may have been averted, marriages saved, jobs preserved simply because of conscientious proofreaders who rescued marital from martial, uniformed from uninformed, and singers from sinners, in the nick.

But one-letter-mayhem still abounds, whether fresh from the typist or the typesetter, and everyone has lists of examples which amuse, shock, amaze, and shake, at the power of that small one twenty-sixth of the alphabet. For example, it can turn:

Years ago, while a senator, Hubert H. Humphrey was quoted in print as having called the then Vice-President, Richard M. Nixon, a “slocker,” and was forced to insisted that the term he used was “slicker,” a form of palatable rhubarb during Presidential campaigns. But just that one letter could have conceivably promoted a libel suit or, in Aaron Burr’s time, even a duel.

Sometimes, the one-letter gremlin forces a double-take, as we encounter him in context, as

When the fire broke out, 20-year-old Russell was alone in the house with his baby sitter.

For the victims of slips such as these there may be some comfort in the knowledge that most people don’t read very critically, just scan lines of print to “get the drift,” and may not notice that what is said, may, thanks to one errant letter, be not at all what is meant. The absolutely hapless victim, however, is the one caught up in a headline–big bold print that’s inescapable. What could John Doe do when his picture appeared on the Financial Page of his local newspaper under this banner:

The only person we know who didn’t object to an error in a headline was Harry S Truman when an early edition of a newspaper declared Thomas E. Dewey the winner in the 1948 Presidental election.Copies of that error are preserved under glass and treasured.

As for the one-letter mischief afoot, let us rejoice that there are only 26 possible culprits.

I enjoyed Alma Denny’s little pice on the disasters that can occur when a single letter gets misplaced. It is astonishing how often marital turns into martial and run into ruin.

But your correspondent unaccountably overlooked the most embarrassing troublemaker of them all. Do you know what inevitably happens when we write about public exhibitions, public performances, public parks, and public games?You do know.

As a former newspaper editor I speak from painful experience on these matters. During four years of my tenure we in Virginia had a governor named Tuck and a prominent state senator named Bustard.

“Proceeds from sales of carved ducks go to handicap children.” [A sign in a Greek pizzeria in Peabody, Massachusetts. Submitted by Nell Wright, Lynnfield, Massachusetts.]

“. . . the situation is likely to deteriorate if nothing is done quickly.” [From an article by Kirk Makin, The Globe and Mail, Winnipeg, 11 November 1987. Submitted by Charles C. Bigelow, Winnepeg.]

“If there are any questions, comments, that arise from any edition of this newsletter, please feel free to contact me (Ron Shaw) at –. I’m also open to suggestive topics for next trimester’s edition.” [From a newsletter, “Total Quality Management,” published by OAO Corporation, 15 January 1993. Submitted by Pam L. Jones, Sepulveda, California.]

“Jim Ed Rhodes attained something most people never do, he achieved his dream. He died Thursday, December 14, 1995, at the age of 86.” [From the Corpus Christi Caller-Times, 19 December 1995. Submitted by A.W. Edwards, Corpus Christi.]