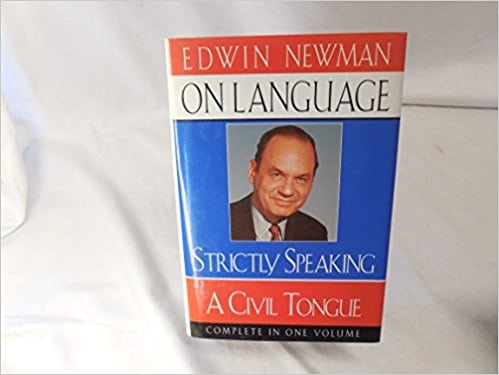 Linguists, especially lexicographers, are bound by a scholarly oath to describe–neither to prescribe nor proscribe–language, and their mission is to record, in as scientific and as unbiased a manner as possible, their observations on language and on how and why it functions. However, as a linguist and lexicographer, I must confess publicly to a form of schizophrenia that I believe afflicts many of my colleagues as well, but to which they might not admit very readily. The schism occurs between what I do about language, professionally, and what I feel about language, emotionally. I think I can be objective about utterances like he don’t, I know who you mean, ain’t that great, and real good as “typical of a particular linguistic level and/or dialect”; but I cannot bring myself to use them nor do I condone my children’s use of them, for I consider them marks of poor education and poor style. I am a linguistic snob.

The stimulus for this confession is the subject book of this review, for, from the advance publicity for Newman’s book, I expected to be raising a supercilious eyebrow (there’s an etymological redundancy for you!) at someone’s rantings about the unfortunate yet ineluctable fact that “They don’t speak English the way they used to!” My professional hackles rise; my emotions find solace in a kindred soul. However–I was misled. Not by the book itself, which doesn’t appear to have been read by the publicity department, but by the publisher’s advance publicity, which describes a book somewhat different from the one published. Strictly Speaking is an interesting, often hilarious, unevenly organized collection of chapters in which Newman vents his spleen on the written and oral journalism of the day. In general, he is right; he is correct more often than not. But on occasion he slips, as on the subject of convince to (as in It may be impossible to convince many people to stop smoking):

The object of convince may be a noun (I convinced him) or a noun phrase, usually (when not in passive constructions) found as a complementary object of a person or pronoun: I convinced him [that he ought to go], where the complement is in brackets; I convinced him of [his right to remain], where the of is the particle used, idiomatically, with convince; I convinced him [to go with me], where the complementary noun clause happens to be an infinitive, to go. Nothing could be more idiomatic, proper English. Never content to rely on myself as a sole informant, I checked about a bit (Merriam-Webster III, OED and Supplements, Fowler, Horwill, Evans, White, Alford, Hodgson, etc.), yet could find not a single syllable on convince, let alone convince to. Even The American Heritage Dictionary, with its stable of proscriptive literati, went no further than The Random House Dictionary, which merely observed that convince is “often fol. by of.” Maybe we ought to convince Newman to write “I shall not contrive imaginary rules for English style and syntax” on the blackboard 500 times.

There are other inconsistencies in the book. For instance, Newman doesn’t seem to be able to remember how many years he spent as drama reviewer for NBC, five (pp. 10, 103) or six (p. 50). He offers some amusing, if snide comments about the wire services’ love for middle initials, then lists himself as Edwin H. Newman on the copyright page, though elsewhere he appears as just Edwin Newman. He uses “and/or,” which surprises me, he misdefines lordosis, and he allows, “he anchored” to appear in the jacket blurb about his NBC activities (that is, not about his sailing activities). Other objections; Newman’s beating of a dead horse with his (now untimely) profuse comments on Nixon; the final chapter, in which the author records what he considers as some of his own best puns. Somewhere from the dim past I recall my father’s exhortation to “Let others praise thee, not thine own self.”

The book does not fulfill the promise of its rather good, earlier chapters: it starts with a bang but ends with a whimper (or, considering the subject matter of the final chapter, a groan).

All this sounds very unfriendly and damning. Nonetheless, the book is really very amusing–even downright sidesplitting in places–and, if the reader can overlook its shortcomings, he will find it a very entertaining collection, with commentary, of the foibles of those responsible for communicating to us (badly) the (bad) news of the day.