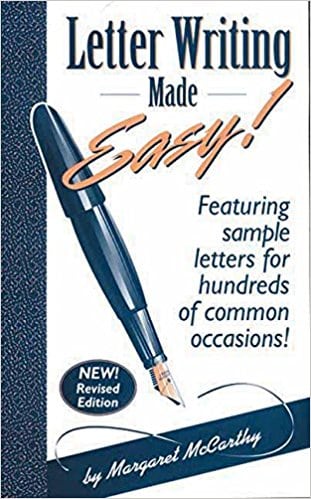 Volumes of ready-made letters are a venerable tradition. They were favourites of the Victorians, and their enduring popularity stems from that indestructible body of people who know what they want to say but don’t know how to say it.

Margaret McCarthy’s two volumes of templates are no better or worse than many of their type, and, with minor adjustments for technology and changing mores, would have been usable in the days of, say, Grover Cleveland.

Subjects like “School bully needs to be stopped” and “Protesting service charges” are perennial. McCarthy changes with the times sufficiently to include form letters to cover “Goodbye to Ex-Significant Other’s Family” and “`Coming Out’ for Family and Friends” (“You are very special to me, and now that I know how brave you are, I value you even more.”) On the other hand, there is nothing about e-mail communication or about the niceties of Netiquette: If you capitalize everything, YOU’RE SHOUTING.

As a bonus, both volumes append “Forms of Address” and “Helpful Addresses”, though it’s hard to imagine would good might be accomplished by a citizen’s simply writing to the “International Monetary Fund, 700 19th Street, N.W., Washington, DC 20431.”

Writing a letter asking for a favour, whether from the International Monetary Fund or someone else, often requires special tact, as in “Allowing a Friend or Relative to Spend the Night”. The line “I wouldn’t ask if it weren’t for the fact that (+name of friend or relative+) and I are very close and I know what type of person (+he/she+) is” allays the suspicion that the prospective guest may be a kleptomaniac or a serial rapist. If the prospective host is a bulimic, say, or someone given to screaming at night, McCarthy covers that eventuality, albeit a little presumptuously, by adding “I really think you and (+name of friend or relative+) would hit it off well. You have many of the same interests . . . .” [my ellipses]

One pleasure of the volumes arises from the arrangement of letters under section headings like “Medical Concerns” and “Career.” Given brief italicized introductions, they have subheadings that sometimes form rivetting miniature narratives. Take, for example, “Neighbors” (“Keep in mind that, although you may not always socialize with your neighbors, they are the people with whom you most need to have peaceful relations.” In this section neighborly feeling begins (“Welcome to the Neighborhood”), builds (“Request to Take Mail” and–no sarcasm involved–”Congratulations on Property Improvement”), culminating in “Let’s Begin a Community Project.”

But then trouble starts about noise (“Please Keep It Down” and “Rowdy Children”), and obnoxious pets invade and yodel (“Your Pet and My Lawn/Backyard” and “Your Dog’s Barking”). The acrimony further mounts over “Assigned Parking Spaces” and reaches a crescendo of recrimination in “Threat to Take Action Against Neighbor.” The whole sorry episode ends on a peevish note over a “Stolen Newspaper/ Magazine.”

From howdy to rowdy, it’s all there.